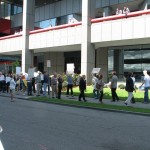 At a recent award ceremony in Washington DC, Ivor van Heerden spoke before a large engaged crowd about the metro New Orleans flood in August 2005 and its aftermath.

“150,000 families lost everything, and to add insult to injury, they were also moved away from their support base,” van Heerden said.

Indeed, the loss of families’ support base for the New Orleans region is likely why the Army Corps of Engineers was allowed in October of 2005 to convene and manage an investigation of its own failures, an obvious conflict of interest.

Dr. van Heerden spoke at a ceremony honoring him with the Joe E. Callaway award for Civic Courage.

The Callaway Award is presented annually by The Shafeek Nader Trust for the Community Interest recognizing individuals who take a public stance to advance truth and justice, at some personal risk.

Louisiana State University will not renew Dr. Van Heerden’s contract in 2010 and has not provided a specific reason for his dismissal. Many believe it is because of his investigations into the levee failures and his outspoken book, The Storm, after the Hurricane Katrina catastrophe.

“It’s a clear case of retaliation for his criticism of the U.S. Army Corps of Engineers,” says Dr. Charles N. Delzell, a professor of mathematics at LSU who spoke to the New York Times.

Within days of the announcement last April that Dr. van Heerden’s contract would not be renewed, dozens of supporters gathered in front of the LSU Health Science Center to protest. The event, organized by Levees.org, garnered national media.

But even though over 4,000 people signed a petition to the Chancellor of LSU, no consideration has been made to reinstate Dr. van Heerden’s contract.

It was a sad day for Louisiana because from then on, experts will be afraid to speak out for fear that they too, will end up like Dr. van Heerden.

But thanks to organizations like the Shafeek Nader Trust, perhaps one day, there will be a brighter day.

Click here see petition signatures and/or to add yours.