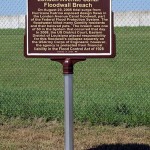 The Louisiana State Office of Historic Preservation has approved Levees.org’s request for a Historic Plaque.

The request was submitted in January 2011.

The proposed Plaque, the group’s second, will be positioned near ground zero of the London Avenue Canal Breach site in the Gentilly neighborhood of New Orleans.

The proposed site, chosen with input from neighborhood leaders and residents, will be the corner of Warrington Drive and Mirabeau Avenue.

The City of New Orleans Parks and Parkways Department has approved the location which is marked with a little purple flag.

Sponsored by Levees.org, the Plaque will be presented as a gift to the residents in the twenty one neighborhoods of Gentilly. An Unveiling Ceremony is being planned for mid to late May.

That Historic Plaque is located at 6932 Bellaire Drive, near ground zero of the 17th Street Canal breach site.