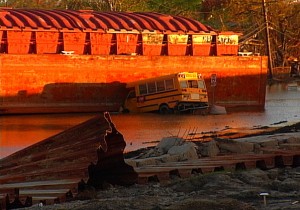 This barge became an iconic image of the levee failures in New Orleans in August 2005. Photo/Francis James

According to Adam Babich, Tulane Environmental Law Clinic Director & Professor of Law, “the Industrial Canal expansion project has gone down for the second time.”

The Court granted summary judgment that the Army Corps of Engineers violated the National Environmental Policy Act and the Clean Water Act by selecting a “deep-draft” plan for its billion dollar Industrial Canal lock replacement project without considering the effect of closure of the Mississippi River Gulf Outlet on the need for a deep-draft canal.

U.S. District Judge Eldon Fallon’s quote of the day on page 16 of the opinion:

“On its face this seems to be the proverbial bridge to nowhere; namely, constructing a deep-draft lock which will never be used by deep-draft traffic.”

Consistent with this Order & Reasons, the supplementary environmental impact study (SEIS) and Record of Decision (ROD) are vacated and remanded and the Corps is enjoined from continuing with the Industrial Canal Lock Expansion Project until it complies with NEPA and the CWA.

Holy Cross is a neighborhood of the city of New Orleans. A subdistrict of the Lower Ninth Ward District Area, its boundaries as defined by the City Planning Commission are: St. Claude Avenue to the north, St. Bernard Parish to the east, the Mississippi River to the south and the Industrial Canal to the west.