Starting at City Park, cyclists ride through the Park and along Bayou St. John to the first stop – the east breach of the London Avenue Canal.  Traveling alongside the Canal, the next stop is the west breach of the London Canal. Then cyclists ride along Lake Pontchartrain to the 17th Street Canal breach site before heading  back to City Park.  The route is designed mostly on marked bike routes.  Cyclists can view both the breach sites and the affected neighborhoods.

To assist bikers, Levees.org has created this interactive Google map (below).

Now, at any time, anyone can view three breach sites – and the affected neighborhoods – of a disaster so catastrophic that the whole world watched it on TV.

In addition, in partnership with the University of New Orleans, Levees.org will also roll out a Virtual Levee Disaster Mobile Tour accessible by iPhone and Android. The tour will include the levee breach disasters of the Industrial Canal (and the affected neighborhoods) as well as the 17th Street and London Avenue Canals.  The roll out is set for July 18.

Participation in Levees.org’s Self-Guided Bike Tour is undertaken at your own risk. Please use caution. 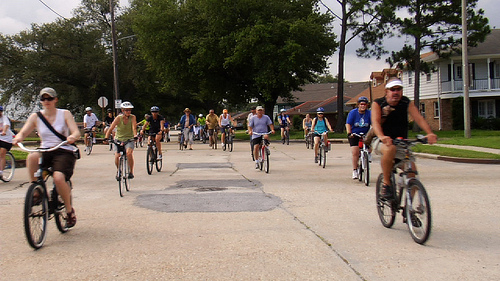