The Keeper’s Response to our Appeal and our Assessment 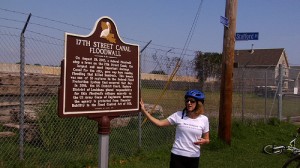 As part of a bike tour, Sandy Rosenthal discusses the breach of the 17th Street Canal on May 6, 2012. Photo/Hubie Vigreux

When the Army Corps of Engineers failed to respond to a request for comment on our nomination of two major levee breach sites to the National Register of Historic Places, Levees.org elected to appeal to the official arbiter for such procedural breakdowns, the Keeper of the Register in Washington DC.

The interim Keeper, Ms. Carol Shull responded to our appeal today in a three-page letter. She described what she considered deficiencies in our nomination.

She wrote that she didn’t believe the breach sites of the 17th Street Canal and the east side north breach of the Industrial Canal was of “exceptional importance.”  We find this odd because we have worked under the guidance of her staff since October of 2010.  They, as well as the Louisiana State Office of Historic Preservation, did believe the levee breach sites met the criteria for exceptional historical significance.

“In addition, the nomination does not adequately describe the effects of the flood on New Orleans beyond a description of the flooding and the resultant deaths,” Shull said. More is needed, she said, on the effects on people, the environment and the economy of New Orleans.

Here again, we worked with Ms. Shull’s staff for over 19 months and decided together that our nomination shall focus on how the breaches, death and destruction had national implications and prompted changes in levee building nationwide that could save lives, property and tax dollars.

At this time, it appears we must go back to Ms. Shull’s staff and request clarification.  We will also ask if her office can provide us with some technical assistance.  This nomination is critically important work, and we want to be certain that everything in the document is as perfect as possible.

We wish to point out that the Corps has an issue with only a few paragraphs in our 40-page single-spaced document.

The interim keeper closed her letter with an invitation to resubmit a revised nomination.  We will do that after contacting Ms. Shull’s staff for clarification on what she wants.

Levees.org also needs to offer the interim Keeper a mea culpa.  We submitted our nomination in digital form on DVD and also on archival paper as required.  But when we printed the document, we did not notice that a number of footnotes dropped off the bottom of some pages.  When we resubmit our nomination, we will be sure the footnotes are not lopped off this time.

Click here for the Corps of Engineers response to a request for comments.