Levees.org rolls out Myth Number One 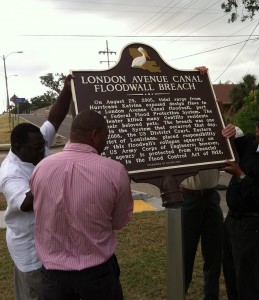 After Katrina and the levees failures, the Army Corps of Engineers quickly set a campaign in motion. Falsehoods were put into the minds of Corps officials who made themselves available to the media.

There were over a dozen harmful falsehoods, but perhaps the most damaging one was what Corps Commander Lt. Gen Carl Strock told the New York Times.

Strock said New Orleans officials deserve a share of the blame for the failure of the 17th Street and London Avenue Canals that flooded the portion of the city with the most people and infrastructure.

That statement effectively let the Corps off the hook. That statement gave the American people a reason to blame New Orleans flood survivors for their misfortune.

Now, in 2012, the Commander admits he had no data to back up his statement.

“I might have illustrated my description with things I had heard but not personally researched, but there was absolutely no intent to deceive anyone.” Lt Gen Carl Strock

And so today, November 30, the official end of Hurricane Season 2012, Levees.org is rolling out Myth Buster Number One:

Responsibility for the levee failures and flooding in the New Orleans’ main basin belongs to the Army Corps of Engineers mainly due to its tragic decision to save $100 million and to short-sheet steel pilings.

Click here for story and for all ten Myth Busters.