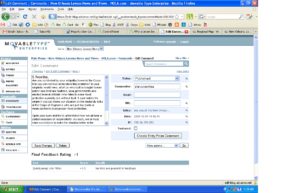 This screengrab proves via the IP address that the commenter is using Army Corps of Engineers’ equipment to harass LeveesOrg: 155.76.159.253 CLICK TO ENLARGE

Today is the first day of hurricane season. In normal times, the discussion would be about the flood protection that the Army Corps of Engineers built to protect the people of New Orleans.

So imagine Levees.org’s surprise when we discovered that this same Army Corps was attacking us.

Today, Levees.org released its 4th in a video retrospective series highlighting hurdles we’ve overcome together since the levees broke.

In December of 2008, using backend tools available to any amateur blogger, I discovered cold hard proof that the Army Corps of Engineers was waging a harassment campaign against LeveesOrg.

Then, over the next six months, we found further proof that for three years, members of the corps hid their identities, pretended to be impartial observers and attacked anyone who criticized them.

They did this by using their federal computers and posting vicious comments online with the Times-Picayune, which at that time was the region’s leading news source.

The Army Corps of Engineers’ campaign of ugly comments shifted responsibility for its levee failures during Hurricane Katrina away from itself and onto the citizens of New Orleans. But they were caught.