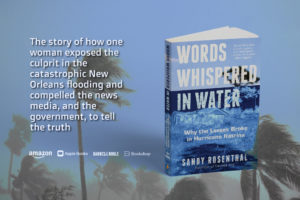 Levees.org founder Sandy Rosenthal has released the second of four excerpts from her upcoming book, Words Whispered in Water: Why the Levees Broke in Hurricane Katrina (Mango Publishing, August 2020).

The excerpt is called Just Seven Weeks. It comes from Chapter 3; The Fairy Tale.

Seven weeks after the 2005 flood, despite four different investigating teams, the surface had yet to be scratched on the who, what, where, and why of the levee-breach event. If one were to count the breaches on a graphic map created by the Army Corps, they would find a total of 52 breaches in the region.[i] It was simply not possible for any human being or group of human beings to explain what happened in so complex a scenario. Communication lines were still down, breaches needed to be plugged, and roads were impassable. Truth be told, it would be many years before all the facts were laid out for everyone to see.

Yet, just seven weeks after the 2005 flood, a small group of business people had decided where the fault lay. They called themselves the Business Council of New Orleans. On the day the floodwalls broke, this group had no phone number, no staff, no meeting minutes, no list of expenses, and no membership list. But, with the city barely dewatered, they had apparently already decided that blame belonged to local officials — people whose chief responsibility regarding floodwalls and levees was maintaining them after the Army Corps built them. By October 20, while some souls were yet to be discovered in their attics, this group had already devised a plan to reorganize the way levee officials (the Orleans Levee Board) were selected.[ii]

Just seven weeks after the 2005 flood, plans were already on paper for “levee-board reform.” The group of businessmen had lined up state Senator Walter Boasso of St. Bernard Parish, to sponsor it. Boasso, a successful business owner, was an “every man’s man.” Before the flood, he was a member of a krewe (an organization that puts on a parade or ball for the Carnival season) called Druids, but soon he would become a member of Rex, one of the city’s most elite krewes.

On November 11, when Boasso’s Senate Bill 95 was introduced in the legislature — and when I was able to read it — I was, as usual, perplexed. It conflicted with information that I had found in a GAO report released in late September.[iii] According to the GAO report, the Army Corps was tasked with designing and building levee protection for the Greater New Orleans area. And the Orleans Levee Board staff was responsible for maintenance of completed structures and for operation (closing gates when hurricanes approached). It seemed to me that, if the levees broke, one should look to the architect and to the contractor, which, in this case, was the Army Corps. To me, blaming the local Orleans Levee Board was like blaming the janitor if a building fell to the ground. Furthermore, I had seen no stories documenting that the Orleans Levee Board had not done its levee maintenance properly. In my mind, it was too soon to be passing laws that required a change to the Louisiana constitution.

The business community was loud in its condemnation of the Orleans Levee Board, yet it named no names. The many dozens of men and women, who had served for decades, had no faces. By looking at the list of 84 men and women who had served on the Orleans Levee Board since 1925, one would see all kinds of upstanding people: city mayors, city councilpersons, and philanthropists. One commissioner who served from 1997 to 2001 was a Catholic nun: Sister Kathleen Cain, a provincial with the Franciscan Missionaries of Our Lady.[iv] But the Business Council of New Orleans had lumped them together as one giant cohort of corruption.

At this exact time, Jim Letten, U.S. Attorney for the Eastern District of Louisiana, told the Associated Press that he would pursue tips that he had received about corruption relating to building and maintaining the levees. Letten said that his office was focused on possible illegal conduct in the political and business relationships of those involved in building the levees.[v]

The Associated Press reporter added, “Local agencies handle most of the building and maintenance of levees.” This is simply wrong. The local agencies controlled none of the building. This news article was circulated coast to coast and fed what the American people already believed. Fingers continued to point toward local agencies and away from the federal agency — the Army Corps. The same Associated Press article closed by pointing out that State Attorney General Charles Foti and Orleans Parish District Attorney (DA) Eddie Jordan were also conducting similar investigations of their own. When the media reports that federal, state, and local DAs are announcing an investigation, that is what is remembered. But, as famously stated by reporter Megan Carter played by Sally Field in the 1981 movie classic Absence of Malice, the government does not tell the media that an investigation is halted.

Sure enough, the investigations by Letten, Foti, and Jordan were eventually closed with no indictments and no press. But the damage done — at a time when the story was under public scrutiny and when the Army Corps refused to answer questions — was incalculable.

[iv] List of Orleans Levee Board commissioners provided from the files of Wilma Heaton, Director of Governmental Affairs for Southeast Louisiana Flood Protection Authority, May 21, 2018.