How it all began: Levees.org’s Flooded House Museum

Four years ago, Levees.org purchased the last remaining house at the site of a major levee breach that had not yet been torn down or renovated.

That house was 4918 Warrington Drive, just a stone’s throw from the London Avenue Canal breach site.

We wanted to create a museum to commemorate and memorialize the flooding of August 29, 2005 caused by the Army Corps of Engineers’ poorly engineered levees.

But Levees.org faced a challenge. We needed permission from the City of New Orleans to convert the residential family home into a cultural monument for visitors. 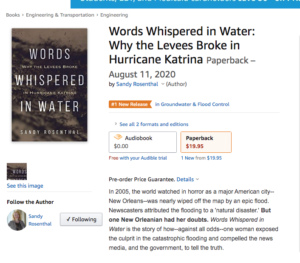 Founder Sandy Rosenthal’s debut book has maintained the status of #1 New Release for ten straight weeks or for 70 straight days.

The book is titled Words Whispered in Water: Why the Levees Broke in Hurricane Katrina.

Rosenthal’s book describes her role as a citizen investigator and how––against all odds––she exposed the culprit in the catastrophic flooding of New Orleans and compelled the news media, and the government, to tell the truth.

It’s a horror, mystery and David and Goliath story all in one. It is her story.

Early praise is piling up for founder Sandy Rosenthal’s debut book, Words Whispered in Water: Why the Levees Broke in Hurricane Katrina.

It’s the story of how––against all odds––Sandy Rosenthal and her grassroots group exposed the culprit in the catastrophic flooding of New Orleans and compelled the news media and the government to tell the truth.

The book will be published by Florida-based Mango Publishing (fast growing independent publisher in 2019 according to Publisher’s Weekly) and will be released on August 11, 2020.

See what they said!

“For years, Sandy Rosenthal has been the go-to source for any reporter seeking to understand the truth about flood protection in New Orleans: what really happened to the levees following Hurricane Katrina and the steps taken (and those that still need to happen) to protect the area and its residents. Read the inside story for yourself in this readable, engaging tale of how Rosenthal began investigating the U.S. Army Corps of Engineers shortly after Katrina and her efforts to hold accountable the Corps and other public officials.”
―Gary Rivlin, author of Katrina: After the Flood

“Putting herself in the path of the US Army Corps of Engineers (USACE), the local media, academia, and entrenched political interests in order to get to the truth about the New Orleans levee system took guts, as well as masterful community organizing. Anyone who is interested in Hurricane Katrina, and in America’s failing infrastructure, will want to read this book told in a fast-paced narrative.”
―Scott G. Knowles, head of the Department of History at Drexel University and author of The Disaster Experts: Mastering Risk in Modern America

“Sandy Rosenthal’s account of the founding of levees.org after the flood of New Orleans is an invaluable memoir of the making of an activist. In a world crying out for citizen action around increasingly desperate climate issues, her story is timely and instructive―and even hopeful.”
―Michael Tisserand, author of the award-winning The Kingdom of Zydeco

“Sandy Rosenthal is a courageous and indefatigable warrior for justice.”
― Dave Eggers, author of A Heartbreaking Work of Staggering Genius