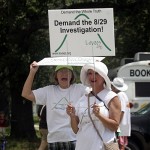 Residents attend a sign-shaking event hosted by Levees.org to demand the 8/29 Investigation. Photo by Armand Richardson, 5-31-08

The Bloomberg wire service, regarded as a premier site for news, ought to hold its writers to a high standard of accuracy and clarity. This applies as well when talking about what caused the damage to the city of New Orleans in 2005 because Bloomberg has so much influence over what the country understands about New Orleans.

I let Ms. Chipman’s editor know that her portrayal of the storm itself as having “displaced 1 million residents and damaged more than half of New Orleans’ housing stock” is simply FALSE.

In the city of New Orleans, the displacement and damage was due overwhelmingly and primarily to the failure of man-made structures, the levees, designed and built by our Army Corps.

To say Katrina caused the displacement and damage is like saying traffic caused the destruction of the Minneapolis bridge.

I encouraged Bloomberg to follow the New York Time’s lead and please issue a correction.