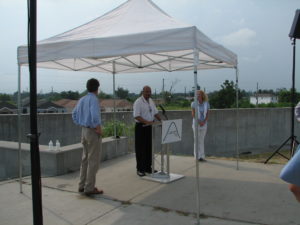 The board of Levees.org announces its goal of nominating two levee breach sites to National Register of Historic Places. August 4, 2010. Photo/Stanford Rosenthal

In August 2010, with the Lower Ninth Ward as a backdrop, Levees.org announced its nomination of two levee breach sites to the National Register of Historic Places – the 17th Street Canal and the Industrial Canal (east side north).

In February 2011, the group hired Mark Barnes, a retired federal expert for guidance through the application effort. The Associated Press reported on this retainment of Mr. Barnes.

In April 2011, the Louisiana State Office of Historic Preservation (SHPO) confirmed that Levees.org’s 28-page documentation of the two levee breaches (how and why they occurred, their significance, etc) has been placed in a public file that federal agencies must use when undertaking any activities under Section 106 that are in the vicinity of the breach sites.

In addition, the information in this file may be consulted by media, groups and individuals interested in the history of New Orleans’ water and levee systems, and the events surrounding the breaching of the levees during Hurricane Katrina.