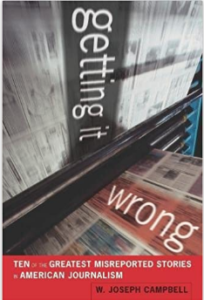 Getting it Wrong: Ten of the Greatest Misreported Stories of American Journalism

BOOK REVIEW: Getting it Wrong: Ten of the Greatest Misreported Stories in American Journalism (University of California Press, 2010)

Joseph Campbell’s book neatly lances ten myths about American journalism. Each myth is the subject of its own chapter, and they’re all fascinating!

But one myth stands out for Levees.org––the myth that journalists rose up and provided spectacular reporting right after Hurricane Katrina.

Chapter ten of “Getting it Wrong” is about the rampant unprofessionalism and breaches of ethics displayed by reporters and journalists in the weeks––especially the first five days––after the levees broke.

According to Cambell, “Katrina’s aftermath was no high, heroic moment in American journalism. The coverage was in important respects, flawed and exaggerated… and made it seem as though the city were a haven for lurking criminals waiting for the opportune moment to inflict violence on others.”

Campbell notes that the over-the-top reporting had devastating consequences, the immediate one being delay of life saving aid. By reporting unsubstantiated rumors of violence, journalists “unwittingly helped slow an already slow response and further wound an already wounded population.”

Campbell does note––rightly––that coverage in a time of disaster is often in error. But he notes that a disaster is an “untenable excuse when thinly documented accounts are shown to be false or exaggerated.” He also quoted the House select committee as noting,

“skepticism and fact checking are easier when the sea is calm, but more vital when it is not.”

The House report soundly criticized the media for its poor post-levee failure reporting, but, as Campbell notes, this wasn’t something you heard in the media.

We were pleased to see that Campbell bemoans how “American journalism loves giving prizes––to its own.” He notes the large number of prizes given to local New Orleans reporters who, we now know, wrote outright false stories and/or drew wrong conclusions.

With the benefit of hindsight, Levees.org feels it is clear that unverified reporting by major media after Hurricane Katrina “set the stage” for the dismissal of the New Orleans people.

In the seven days after the storm, and subsequently, through the next seven weeks, the poor reporting described by Campbell caused a distinct and irreparable prejudice toward a population that had suffered immeasurably.

In Levees.org’s view, it set the stage for the Army Corps of Engineers’’ soon-to-be-launched P.R. campaign to blame the city’s inhabitants for the failures of the federal agency’s levee building.

Then, when top officials with the Army Corps’ blamed the flooding on local levee officials rather than itself, the foundation of shame was already in place.

Campbell’s book is a giant step in correcting that wrong.

I am grateful to Professor Edward T. Walker.

He’s brought us an eye-opening piece of scholarship about a hidden world – the world of elite public affairs consultants and their big money clients.

Walker’s book: Grassroots for Hire: Public Affairs Consultants in American Democracy is based on meticulous research and tons of interviews.

It’s a splendid platter of data.

According to Walker, some 40% of massive Fortune 500 corporations use PA consultants, ostensibly to find people who already would be supportive of the client’s agenda, and mobilize them, using the same tool kit that real grassroots groups use.

But Walker observes that “a lack of disclosure about the funding” makes it difficult for citizens to interpret why they’re being mobilized.

Walker notes that PR companies justify their shadowy work with excuses like “…if the campaign doesn’t involve fraud or misrepresentation of citizens’ authentic views, then it shouldn’t matter who helped those individuals or groups find their voice.”

But Walker believes that the selective targeting of activists creates inequality. Campaigns can falsely appear to represent “the broader public interest,” when in fact, campaigns may engage a public that’s already over-represented.

Walker says “the strategy of funding third party advocacy without disclosure” has exploded since the 1960s and he states repeatedly in his book that this large industry is under-investigated and under-examined.

One sad outcome is that true grassroots groups face skepticism over whether or not they are bona fide.

Walker writes, “campaigns that are less than fully transparent about their sponsorship may decrease public trust in advocacy groups in general” with the result that much advocacy today is believed to be untrustworthy, inauthentic, and covertly funded.

Walker notes, however, that all is not lost. Critical observers who ask tough questions about funding can expose bad behavior.

Walker includes an example from 2006. A popular blog called Wal-Marting Across America, written by “Jim and Laura,” detailed the couple’s travels in an RV and their encounters with Walmart workers who always said good things about their employer. But it was soon disclosed that Walmart was paying for the RV rental, gas and fees for writing the blog. The stunt is now a case study.

When exposed, fake grassroots is considered abhorrent, and a lesson is sent out to other conglomerates.

Grassroots for Hire is a dry academic textbook and Professor Walker is very buttoned-up in his delivery of the facts. But it’s precisely the book’s neutral voice and non-inflammatory style that contributes to its value. 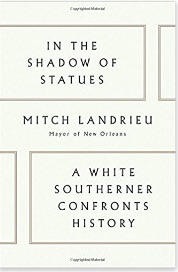 BOOK REVIEW: “In the Shadow of Statues: A White Southerner Confronts History” (Viking, 2018).

Former Mayor of New Orleans Mitch Landrieu tells a story about how he grew up in a household where one was always expected to attempt to look at issues from the other person’s point of view. As Landrieu explains it, this trained him to look to understand the nature of the pushback he received his entire life. In Landrieu’s case, the “pushback of his lifetime” was national disagreement over four Reconstruction-era statues.

I learned something reading the book that I did not know, namely that Landrieu had researched the proposed plan to relocate four statues away from prominent public spaces long before the official removal of the Confederate flag from the top of the statehouse in Charleston in July 2015.

In his book, Landrieu says “history is purposefully false,” and he rails against the idea of sanitizing history. I read the book because I wanted to see how he framed the story of the New Orleans Flood of 2005. Too many people have characterized the flooding as due to a monster storm (false), due to a city that lay completely below sea level (false) or due to local corrupt officials (false). I was not disappointed.

On page 99, Landrieu wrote, “the levees, we learned later from federal investigations, had been compromised through faulty design by the Army Corps of Engineers.”

On pages 112-113, he writes about how neighborhoods – black, white and mixed – were affected by water at equal proportion.

“We shouldn’t blame people for losing what they had, when the levees broke and destroyed their homes because of massive human error by the Army Corps of Engineers, a federal agency.”

Not everyone will agree on Mitch Landrieu’s legacy as the mayor of New Orleans. But to me, Mitch Landrieu is not a hypocrite on the subject of history being sanitized and purposefully false.

This engaging book will likely be read for decades. And I am glad Landrieu’s facts were right about the flooding of New Orleans during August of 2005.

While portions of Rob Verchick’s book are required reading at several law schools and graduate programs in disaster studies, the book also makes the economics of environmentalism remarkably accessible to lay people. With good writing skills and use of personal experiences, Verchick explains the important distinction between manmade infrastructure (e.g. buildings and bridges) and natural infrastructure (soil, wetlands and forests). And within this analysis, we find that the infrastructure of the Louisiana coast provides not just goods, but also services, most significantly, storm surge reduction.

One gets an education-packed read in “Facing Catastrophe.” For example, we learn that half the world’s population lives near the coast and that the state of Louisiana’s coastal plain is crisscrossed by 10 major navigational channels.

Using illustrative examples from disasters all over the world, Verchick lays out how laws allow for valuable natural infrastructure to be squandered yet at the same time, “a government would never allow private parties to dismantle bridges for cheap steel.” Verchick analyzes the failure of environmental policy in protecting natural infrastructure and for imagining proactive solutions. A high price leads to judicious use and perhaps conservation whereas a low price, he says, leads to gluttony. 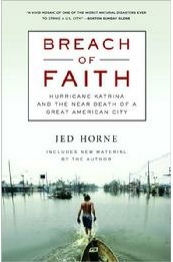 Author Jed Horne has shown his journalistic genius in converting a mountain of facts into an exciting page-turner. By blending real life stories with one of the century’s most memorable – and horrific – events, Horne is likely responsible for assuring that the Flooding of 2005 is remembered, and with accuracy.

Filled with details in settings before, during, and after the terrible flooding, Horne infused these details with spirit, and at times, gentle humor. For example, in describing what Gregory Richardson, a frightened homeowner could see from the roof of his flooded eastern New Orleans home, Horne wrote “…he heard a sound, the tapping and ripping sound of another roof being breached from the inside out, and in due course the house two doors down hatched another human”

There are countless colorfully presented documented references that explain not only the “what” and “why” of the flooding but also the intense voluminous disinformation about it that pervaded the media after the fact….” 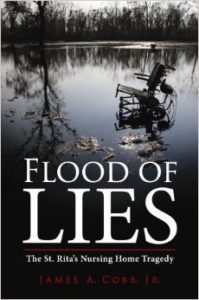 James Cobb, the trial lawyer who defended nursing home owners Sal and Mabel Mangano, has written a superb book about his personal experience. “Flood of Lies” is a who-dunnit thriller about the most well-remembered event during Hurricane Katrina – the tragic deaths of thirty-five vulnerable nursing home residents. Through Cobb, we get a first hand look at everything: political intrigue and trickery, depression, sorrow, alcoholism and suicide.

Upon the release of “Flood of Lies,” just shy of eight years since Hurricane Katrina, the American citizen at large does not understand that the devastating flooding in New Orleans was primarily due to the failure of levees and floodwalls designed and built by the Army Corps of Engineers. Without giving away the exciting shock ending, “Flood of Lies” is about the only jury who decided who was responsible for the worst civil engineering disaster in United States history.

The events that unfolded after the levees broke on August 29, 2005 need to be remembered. So I am glad that James Cobb wrote a book about it, and I expect that “Flood of Lies” will be read and appreciated for decades to come. 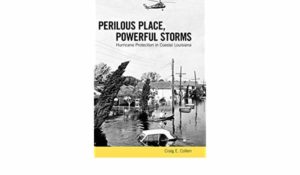 But because the book may be referenced often in the years to come, it is important to point out some undocumented passages and unfounded conclusions pertaining to the U.S. Army Corps of Engineers and the flood protection structures they built in metro New Orleans.