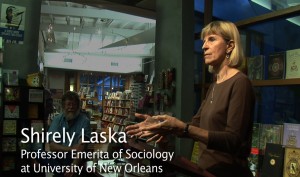 Shirley Laska at book signing for Catastrophe in the Making; photo by Hubie Vigreux 9-22-09

This figure is much higher than the percentage reported last year (43%) in a June 2008 briefing to Congress.

Manmade levees, like navigational channels, highways and dams are alterations to a region’s hydrological character and landscape, and if done irresponsibly can be devastating. This may be what happened in north Georgia.

Jacqui Jeras, CNN meteorologist, said the urbanization of Atlanta and its suburban sprawl also contributed to the floods. “There used to be a lot more earth and soil to help absorb this stuff,” she said. “But the rain really fell on the concrete jungle.”

Sociologist Shirley Laska and author of just released Catastrophe in the Making, told Levees.org that residential development is at the core of the methods that many communities use to grow their tax base.

It is a very powerful driver and participants are often regional, even national interests in conjunction with local, “growth machine” interests. The predictions of flooding are usually conservative and not stable: development adds to more flooding because wetlands are targeted (thus losing the absorption quality) and surfaces are covered by “big boxes,” streets, homes etc. so the flooding gets worse.