Who is that young man who played “A Closer Walk With Thee”? 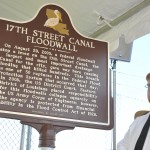 Many have inquired about the young man who played “A Closer Walk With Thee” at Levees.org’s Unveiling Ceremony of its first ever State Historic Plaque on August 23, 2010 near ground zero of the 17th Street Canal.

Mr. Doyle Cooper is a senior at NOCCA and New Orleans Charter for Science and Mathematics. He has been playing Trumpet since the 5th grade. After the levees broke, Doyle has been dedicated to preserving the Traditional Jazz that was born here in our city.  He was grateful for the opportunity to be a part of the Unveiling Ceremony to commemorate the event that changed all our lives.

Doyle needed special permission to leave school for the Unveiling, and Levees.org gave Doyle a small donation for his efforts.  Doyle responded by saying how much the Ceremony meant to him.   Doyle’s mother, Leslie Cooper explained to me that he is using the check and saving his own money to buy some beginner music books that he gives to kids when they are deciding if they want to play trumpet or not. He loans them a horn and gives them the book and a few lessons. He also tries, said his mother, to keep the parent from putting out the expense of a horn until the child decides if they really want to stick with it.

Thank you Doyle for your dedication!