What it means to say We’re Winning 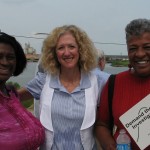 Recently a Levees.org supporter asked me why I always sign my letters with the words “We’re winning.”

Her question gives me an excuse to talk about our many successes.

When my (then) 15-year old son and I launched the Levees.org website 3 months after the levees broke, most people thought metro New Orleans was simply impossible to protect, and so blamed us, the citizens, for what happened.

But through patient education and persistence, we are showing America that New Orleans and St. Bernard Parish are exactly where they belong.

How do we know we’re winning? Here’s some recent signs and indications.

As a result, reporting by the media has evolved and now focuses much more on the root cause of the flooding (levee failure). Five years ago, virtually all media blamed a hurricane for the flooding of New Orleans. Today, such a ‘shortcut’ is far less common, and this is evidence that your support of Levees.org is paying off. Levees.org supporters have been cited as “critical” in the passage of Reform Legislation to the Army Corps of Engineers in 2007. Levees.org has since been dubbed “an influential grassroots group” by the Associated Press.

This year, three members of Levees.org’s board were invited to participate in Mayor Mitch Landrieu’s first-ever Flood Control and Restoration Task Force of 20 total members. Further, the Mayor has appointed a member of his office (Elliot Perkins, Historic Districts) to serve on Levees.org’s Team to nominate the levee breach sites to the National Register of Historic Places.

In lieu of an editorial, New Orleans Magazine chose, on the occasion of the 5th Anniversary of the Levee Failures, to present a photograph of Levees.org sign installed near Ground Zero of the 17th Street Canal.

And most recently, my son and I were chosen among 15 other individuals to be spotlighted for their civic work in a permanent exhibit by the Louisiana State Museum set to open October 23 at the Presbytere in New Orleans.

These successes are all important because when the people of America understand that the flooding of metro New Orleans was a federal responsibility, they will see rebuilding as a federal duty.

And with each day that passes, the truth about the terrible flooding spreads even more. That is why we’re winning.