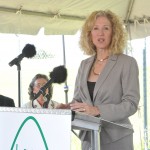 Levees.org has released its 28th video.

This video, about Levees.org’s first ever Louisiana State Historic Plaque begins with the physical installation at ground zero of the 17th Street Canal breach site. The installation sequence is accompanied by original music performed by composer Mike Hood.

The later half of the video depicts the Press Conference and Unveiling of the Historic Plaque before a large crowd of supporters.

Sandy Rosenthal founder of Levees.org spoke a few words before unveiling the plaque. Everyone read the words aloud together. It was an emotional moment.

Actor Harry Shearer, director of The Big Uneasy joined the Ceremony and spoke a few words.

The ceremony closed with the trumpet music of 17 year old Doyle Cooper who performed a beautiful rendition of “A closer walk with thee.”

To the delight of onlookers, both the installation and the ceremony occurred under the watchful eyes of several beloved Louisiana brown pelicans, an unusual sight so far inland. According to Paul Kemp, Vice President of the National Audubon Society, the unusual display of pelicans was due to the presence of a Category 1 hurricane in the Gulf of Mexico. Said Kemp, “Pelicans don’t like big waves and high wind.”

This Historic Plaque is the first of many. On December 8, 2010, Levees.org issued a news release announcing that it will hold a fundraiser to raise the money for a Second Historic Plaque at the London Avenue Canal Breach Site in the Gentilly neighborhood of New Orleans.