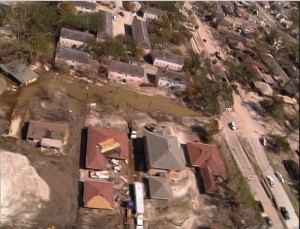 A new essay by Chris Edwards just released by the Cato Institute examines the Army Corps of Engineers’ competence in building infrastructure for civilian purposes noting that the agency which employs about 23,000 people will spend about $9.2 billion in fiscal 2012.

We note with appreciation that the essay contains a well written analysis of the Army Corps of Engineers’ role in the flooding of regional New Orleans during Katrina.

Having studied the facts relating to the 2005 flooding for six years, Levees.org is qualified to comment on the quality of the passage.  We say it passes with flying colors.

We note that Edwards borrowed heavily from the scientific studies, and that he also quoted reporter Michael Grunwald who Levees.org has worked with closely since 2005.  Edwards also relied upon Environmental Defense for much of the material, another organization that Levees.org is closely aligned with.

Factually correct descriptions of the horrific flooding on August 29, 2005 is evidence that Levees.org is fulfilling its mission of education.