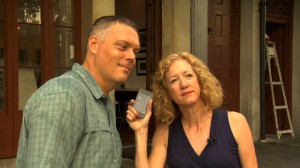 Aaron and Sandy listen to audio on the Levee Breach Tour, brought to everyone for free by NewOrleansHistorical.org. Photo/Hubie Vigreux

In collaboration with UNO, the Louisiana State Museum (LSM) and the New Orleans Public Library, Levees.org is proud to roll out a free mobile tour of the major levee breaches in New Orleans.

Starting in Jackson Square at the LSM’s exhibit Living with Hurricanes, Katrina and Beyond, the virtual tour features the catastrophic breaches of the Industrial Canal, London Avenue Canal and the 17th Street Canal floodwalls.

The tour is accessible on NewOrleansHistorical.org. For free!

The new platform for sharing stories is being developed collaboratively by UNO’s History Department and Tulane’s Communication Department.

To take a tour, one simply downloads the free app to an Apple or Android Smart phone. The tours can also be enjoyed on the web.

This new app is especially important for Levees.org since the Army Corps of Engineers is using its influence to delay the group’s application to list the breach sites to the National Register of Historic Places.

The National Urban League will be the first major organization to use the new app when it hosts a bus tour during its annual conference in New Orleans, July 25-28. President Barack Obama will give the opening address at the Ernest N. Morial Convention Center.

To view the tour on the Internet, click here.

To download the app, follow the links provided for both Android and Apple mobile devices on the main page from your smart phone:
http://www.neworleanshistorical.org/