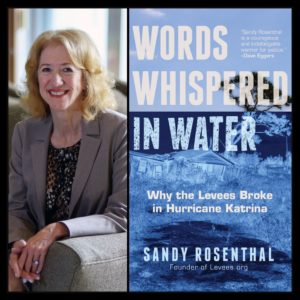 Ricardo Pineda, a Water Resources Engineer for over 40 years, who served six years as a commissioner for the Flood Authority East, has positive remarks about Rosenthal’s book which was critical of the post-Katrina levee board reform.

Rosenthal believed the levee board reform distracted attention away from the true culprit in the disaster, the U.S. Army Corps of Engineers.

Below is Ricardo Pineda’s full review.

I have reviewed multiple reports on the failure of the levees in Hurricane Katrina including the reports by IPET, ASCE and Team Louisiana.  Also “ The Great Deluge” by Douglas Brinkley and “Zeitoun” by Dave Eggers. Sandy Rosenthal’s book is a “must read’ if you are interested in learning why the levees failed and what happened during the response and recovery.  Sandy’s book tells her courageous story of seeking information and truth why the levees failed, who was responsible and efforts to get the word out to national media and the state government, federal government and professional organizations. Her story is one of a David versus Goliath since many of the government and professional entities did not like her conclusions and actively worked to keep her from telling it. Sandy’s book should be required reading for professionals involved in “Risk Communications” including engineers involved in public communications after a disaster. Congratulations Sandy on an excellent book telling your own story, demonstrating your grit, perseverance and determination of your difficult journey to make your position and the facts that support it available to the public.