After eight month of preparation, founder Sandy Rosenthal launched her first podcast episode of Beat the Big Guys on June 21, 2021.

The show is designed to help citizens-at-large who see a problem in their town or community but may feel helpless to do anything about it. 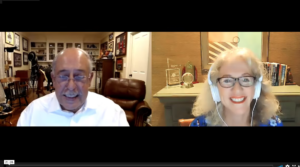 Each episode will feature major celebrities and experts, where Rosenthal will provide free and inexpensive tools to help her listeners Beat the Big Guys.

Rosenthal’s first guest is Lt Gen Russel Honore, who brought order to New Orleans when the Army Corps of Engineers’ levees broke in August of 2005. General Honore was brought back into the spotlight at the first of this year. One week after the January 6 Capitol insurrection, House Speaker Nancy Pelosi appointed the General to review the security and infrastructure at the historic building. Honoré and his team finished the review in March. Now, they are urging Congress to pass emergency legislation to fund recommended security enhancements.

Find Beat the Big Guys wherever you find you favorite podcasts. Or you can click here.