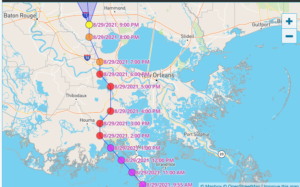 The path of Hurricane Ida

On August 29, 2021, Levees.org reached out to its national supporter base of which two thirds is outside of Greater New Orleans. We could do little more than offer warm thoughts and prayers to those in Hurricane Ida’s path.

Yesterday and today, we’ve been closely monitoring the news reporting on the Army Corps of Engineers’ new levee protection system in New Orleans.

News stories no longer blame the people of New Orleans, or the pre-Katrina levee board commissioners, for the levee catastrophe 16 years ago. That victim blaming has ended and that’s good. That progress.

However, while news reports have announced that the Army Corps’ new system had held, only one has focused attention on the reason the Army Corps’ system failed 16 years ago.

That one news house, The Washington Post, used a quote from the founder of Levees.org which drew attention to the “horrific human cost” of the new system––the lives of over 1500 people sixteen years ago when the Army Corps levees failed during Hurricane Katrina.

The unspeakable human cost must not be forgotten, especially in this age of hotels and condos falling to the ground. Levees.org’s work is not over.