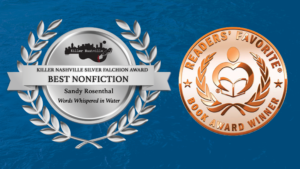 On August 21, Rosenthal learned that her book had won the Silver Falchion Award in the Best Nonfiction category. This award is given to debut authors who incorporate mystery, suspense and thriller into their work.

On September 15, Rosenthal got word that her book had won the Readers’ Favorite Award in the Nonfiction – Government/Politics category.

These two awards brings the total number of awards to seven. “Words Whispered in Water” has also won four distinctions.

For more about the Silver Falchion Award, the Readers’ Favorite Award, and the other five awards that “Words Whispered in Water” has won, click here.