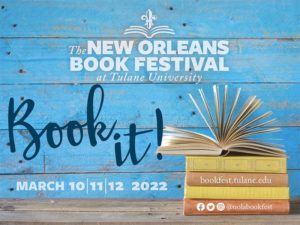 Levees.org founder Sandy Rosenthal will be a guest panelist at the NEW ORLEANS BOOK FESTIVAL at Tulane University.

Tulane University will host its inaugural weekend of the Festival March 10-12. It will be a three-day, in-person literary celebration featuring more than 100 national, regional and local authors, including some of the nation’s most beloved bestsellers. The festival is free and open to the public. A schedule of events will be released in February.

The lineup of Best-Selling Authors includes Levees.org founder Sandy Rosenthal for her debut book, Words Whispered in Water; Why the Levees Broke in Hurricane Katrina (Mango, 2020).

According to its press release, the new, major literary event for the Crescent City, whose debut was postponed by the pandemic, will feature panel discussions, moderated conversations, keynote lectures, book fairs, family programming and workshops. Each day will include at least one major plenary session, which will feature a leading author. The event will also provide a forum for media outlets, authors and readers to network and collaborate in one of the world’s most vibrant and culturally diverse cities.