On August 23, 2010, Levees.org unveiled its first ever Louisiana State Historic Plaque on city property at ground zero of the 17th Street Canal. This was the first of what is intended to be many such plaques in Greater New Orleans. Created and installed for both visitors and residents, the plaques, adorned with the beloved state bird, explain why the flood protection failed and what were the consequences.

On Friday May 20, 2011, Levees.org and Irvin Mayfield Jr hosted an Unveiling Ceremony for the second Louisiana State Historic Plaque near ground zero of the London Avenue Canal breach site. 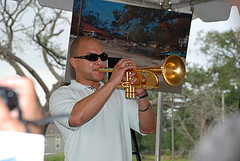 Over 100 residents attended the commemorative event held at the corner of Mirabeau Avenue and Warrington Drive in the Gentilly neighborhood of New Orleans.

Irvin Mayfield Jr. played the first song he ever learned, “A Closer Walk with Thee” on the Elysian trumpet, hand-built by David Monette, and dedicated to the memory of Irvin Mayfield, Sr. and all of the victims of the flooding on August 29, 2005. The event closed with the release of two doves by Big Chief Clarence Dalcour of the Tribe Creole Osceola. 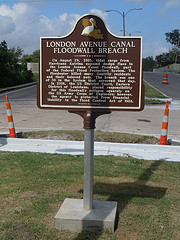 While the Historic Plaque is Levees.org’s gift to the people of Gentilly, the text was crafted and the location was chosen in collaboration with the neighborhood association leaders and affected residents. Just as in the case with the 17th Street Canal, the Plaque is the embodiment of a neighborhood initiative.

Levees.org supporters paid for both Plaques which cost $1740 each.

If you would like to contribute to Levees.org Plaque Program, you may do so by clicking here: http://bit.ly/donateLevees