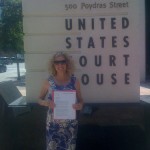 On June 17, 2009, WWL-TV in New Orleans exposed an apparent campaign of disinformation by employees of the U.S. Army Corps of Engineers regarding the failure of the flood walls and levees during Hurricane Katrina and in response to any subsequent public discussion of the Corps’ failures.

In the news story, WWL-TV obtained a sworn affidavit containing disturbing revelations about this disinformation campaign from Mr. Jon Donley, the Founder and former Editor-in-Chief of the Times Picayune’s online affiliate, Nola.com.

The 3-page document details how a group of about 20 individuals – whose usernames have been confirmed to originate from computers at the Army Corps of Engineers New Orleans District – posted hundreds of politically-motivated and abusive comments using Nola.com’s user enagagement features.

These posts, as stated in the affidavit were made by Federal employees masquerading as ordinary citizens.  They reflect a possibly coordinated effort to abuse a public forum in order to shift responsibility from the agency’s destructive and deadly levee failures away from itself and onto the citizens of metro New Orleans.  This seemingly coordinated effort was done on the taxpayer’s dime while using taxpayer-funded equipment.   Many of these sort of comments were released last week on our website.

Furthermore, the affidavit asserts that there are numerous comments that “appealed to racial division and at times engaged in racial slurs” against African American citizens in the New Orleans region.

These comments also appeared to be by Federal employees, apparently on the taxpayer’s dime using taxpayer funded equipment.  Although this is a potential a violation of Federal Civil Rights law, these sort of comments have not yet been released to the public.

Mr. Donley’s affidavit referenced hundreds of comments, but that covered only a six-week period on a spreadsheet he ran.  In an email to Levees.org, Mr. Donley said he is very comfortable saying he observed “thousands over the entire nearly three-year period.”

In line with our mission of education, Levees.org, on March 16, 2009 requested that Times Picayune/Nola.com provide all such comments and usernames originating from the Corps’ office.  Their lawyer told us that while there is no law specifically preventing them from providing the data, they would elect to withhold it anyway, citing policy.

In light of these appalling revelations, we, the undersigned strongly urge you to have the Department of Justice conduct an investigation into these alleged activities as well as secure a full disclosure of the comments data.

We, the citizens of the region deserve to know the full extent to which multiple individuals with the Army Corps of Engineers may have been abusing the user engagement features at the Times Picayune/Nola.com.

Yours truly,
Mtumishi St. Julien
Chairman of the Board