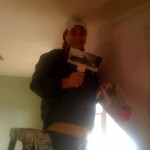 Muriel Altikriti volunteers to help a St. Bernard Parish resident be able to move back into her home for Christmas 2009. (photo by S. Rosenthal)

MSNBC’s Rachel Maddox did her homework and invited Mike Grunwald of TIME magazine to discuss federal Judge Stanwood Duval’s landmark decision holding your Army Corps of Engineers both responsible AND liable for the flooding caused when its levees broke in New Orleans and St. Bernard Parish.

Mike Grunwald, who once grumbled to me over the phone that “he wasted much of his career trying to shed light on the agency’s corruption and negligence,” did a stellar job as interviewee. He closed with this:

“…we‘re angry about the Army Corps killing 1,000 people…..I think this will provide a hook for people to say, “Hey, you know, the federal government did this. You know, this wasn‘t the fault of people living in harm‘s way. They were put in harm‘s way.”

“It’s liberal political pandering to insist that there people living “in harm’s way” should never be judged as irresponsible for failing to evacuate.”

Redirecting the conversation to those who didn’t evacuate is tantamount to obscuring the true issue and the obvious fact that changes must be made in the way water projects are chosen, funded and implemented in America.

Coincidentally, I volunteered for five hours yesterday caulking and sanding the Corps-flooded but now almost completely renovated home of Miss Lisa on West Christie Street in St. Bernard Parish who hopes to be back in her home for Christmas 2009.

Visit msnbc.com for Breaking News, World News, and News about the Economy