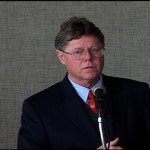 Van Heerden’s contract with LSU will expire May 21.

In February, van Heerden sued LSU and four administrators alleging that his LSU career is ending because he blamed the U.S. Army Corps of Engineers for the failure of levees and floodwalls in New Orleans during Katrina in 2005. He says LSU officials were worried that federal funding would be jeopardized.

In a sworn affidavit released yesterday, Ivor van Heerden named those at LSU who were angry that he criticized the Army Corps.

Meanwhile, the 50,000-member American Association of University Professors (AAUP) has notified LSU that it has established and ad hoc committee to investigate the school’s action against van Heerden.

Click here for more about the latest action by van Heerden’s attorneys.