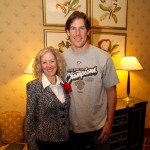 Levees.org is delighted that former Saints linebacker and Super Bowl champ Scott Fujita has donated $25,000 to the America’s Wetland Foundation and the Gulf Restoration Network. Each organization will get $12,500.

But the Fujita family will do even more than donate a significant chunk of Scott’s Super Bowl check. Scott will use his facetime to educate folks outside New Orleans on the importance of healthy Louisiana wetlands not just to the state but to the nation.

Gulf Restoration Network (GRN) is a long time ally of Levees.org. GRN’s mission is in line with Levees.org’s which is education on why metro New Orleans was so vulnerable when Katrina arrived in August 2005.