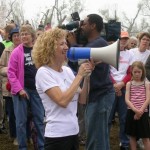 At our kick off rally in January 2006, Levees.org vowed to continue working until the facts about the New Orleans flood became mainstream household knowledge.

And that day is apparently getting closer.

The New York Times’s Brian Stelter was intrigued by Levees.org’s program which awards a “Seal of Approval” when reporters accurately describe the flood of metro New Orleans.

The article focused on how we encourage reporters nationwide to avoid harmful inaccurate ‘Katrina shorthand.’ Levees.org encourages reporters (and public figures too) to describe the 2005 flood as ‘Katrina and the federal levee failures’ rather than just Katrina.

In this fine piece of journalism, Mr. Stelter quoted our reasoning exactly as I said it to him, word for word:

“A major American city went underwater and many people died; we think those few extra words are worth the effort.”

One response to “Levees.org featured in New York Times”