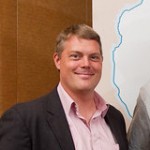 We interviewed Aaron Viles this morning on the catastrophic oil spill in the Gulf of Mexico.

Top of the news has been the massive oil spill heading toward Louisiana’s ecologically rich wetlands as storms threaten to interfere with protection efforts.

Mr. Viles, Campaign Director for Gulf Restoration Network believes responsibility should not be placed with the federal government.

“Responsibility for this crisis belongs with British Petroleum,” said Mr. Viles. “The law is clear.”

He maintains that the resources and assistance of the federal government are needed to deal with this crisis. However, he believes that U.S. taxpayers should not be burdened with paying for it. BP should reimburse the US government.

One response to “INTERVIEW: Aaron Viles of Gulf Restoration Network on BP Oilspill”