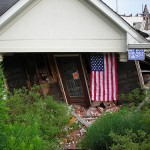 Levees.org believes in the media, and that is why we try so hard to work with reporters and help them get the story right about the metro New Orleans flooding.

But after four and a half years, it seems the New York Times – the paper with the third highest subscription rate in America – does not appear to care about telling the story accurately.

A few days ago, in a letter to a freelance reporter, senior editor Greg Brock with the New York Times defended an NYT reporter’s general description of the 2005 flooding as a ‘natural disaster.’

Such a simplification is inaccurate. Metro New Orleans was flooded by levee and floodwall failure, due to shoddy engineering, a Man-made Disaster not a ‘Natural Disaster.’

But here’s the shocker. Mr. Brock closed his letter with this:

“I think all the families who were displaced and who lost loved ones would agree that a hurricane did exist.”

Feeling that those very people deserve a chance to respond to Brock’s assumption, Levees.org has called upon its nearly 25,000 supporters and invited them to contact the New York Times.

Engaged people can write to Clark Hoyt, reader representative for the Times. Please copy and paste this email address: public@nytimes.com