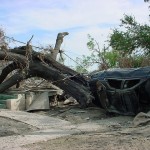 This photo was taken on October 10, 2005 in the Lower Ninth Ward by Francis James using a Sony FDMAVICA.

On Wed August 4, 2010 at 9:30a, Levees.org will announce its nomination of several Levee Breach sites in metro New Orleans to the prestigious National Register of Historic Places (NRHP).

It’s a tremendous honor for a site to be listed on the National Register, and will help assure that the properties are held in high esteem.

In a Multi-Property format, Levees.org has initially nominated two breach sites, the 17th Street Canal Breach and the Industrial Canal Breach (eastern side), but have signaled to the Louisiana Division of Historic Preservation that four other breach sites will also be nominated to the National Register.

The amount of documentation required to meet federal guidelines is voluminous, and Levees.org was compelled, in the initial stages, to choose two breach sites which – by themselves – seemed to best represent the terrible devastation on August 29, 2005.

But this is just the beginning. Levees.org has alerted the Louisiana State Office of its intent to nominate four more breach sites which affected other New Orleans neighborhoods and also St. Bernard Parish.