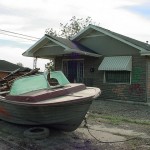 This photo was taken on October 10, 2005 in the Lower Ninth Ward by Francis James using a Sony FDMAVICA.

And he has recently shown himself to be educated and knowledgeable on the true facts of the New Orleans flooding five years ago.

Coach Payton is not confused or misled by inaccurate media reports.

In a recent CNN interview, while talking about the unearthly quiet in the City in the month of January 2006, he mused, “…I knew the failure of the levees was worse than the storm…”

When it comes to the city of New Orleans and St. Bernard Parish, Mr. Payton is exactly right. And has earned himself yet another honor, the Levees.org ‘seal of approval’ for avoiding harmful inaccurate Katrina Shorthand.