Dedication of Historic Plaque set for Monday at 10:30am 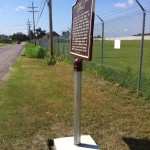 The beautiful Historic Plaque is now in place ready to be unveiled.

On Monday, August 23, at ground zero of the 17th Street Canal in Lakeview New Orleans, Levees.org will unveil its first ever State Historic Plaque.

The traditional Louisiana state plaque, complete with an emblazoned and beloved brown pelican, briefly describes the events surrounding the catastrophic breach of the 17th Street Canal during Katrina.

The plaque was recently approved by the Architectural Historian with the Louisiana Division of Historic Preservation, and will be placed on the New Orleans city right-of-way on Bellaire Drive in the Lakeview neighborhood.

Levees.org sees this as the first of many historic plaques to be installed in New Orleans and St. Bernard Parish. The group envisions plaques at the London Avenue Canal, the Industrial Canal and the Mississippi River Gulf Outlet to name just a few.

What: Dedication Ceremony of Historic Plaque
When: Monday, August 23 at 10:30a
Where: 6932 Bellaire Drive New Orleans (T-intersection of Bellaire and Stafford)

New Orleans Councilwoman Susan Guidry, Council President Arnie Fielkow and Harry Shearer (director of The Big Uneasy to be released August 30) have confirmed they will attend.

UPDATE: A spokesperson for Mayor Mitch Landrieu will speak at the Ceremony.

5 responses to “Dedication of Historic Plaque set for Monday at 10:30am”