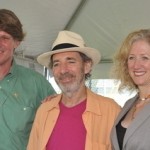 In the short interview, Mr. Hinerfeld asks some great questions, and Mr. Shearer, like the pro that he is, makes some great points. Here’s an excerpt:

HINERFELD: “So you’ve got a new movie. Can you say what it’s called and what it’s about?”

SHEARER: “It’s called The Big Uneasy. After five years I despaired of the national news media acknowledging the story of why New Orleans flooded in 2005, which had been meticulously investigated and documented by two independent teams of engineers and other scientists which came the conclusion –in the words of one of the engineers – that this one of the greatest engineering catastrophies since Chernobyl. Chernobyl’s the big leagues. So New Orleanians had known a lot of this stuff because the findings of the investigators were piecemeal coming out in the local press, but the national media had formed their template of the story – big storm, city below sea level….”

Click here for the story on NRDC blog.
http://switchboard.nrdc.org/blogs/dhinerfeld/the_breadth_of_harry_shearers.html