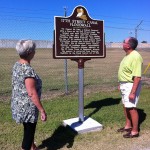 AT 9AM CST, LEVEES.ORG ISSUED THIS NEWS RELEASE:

Levees.org will soon install its second Louisiana State Historic Marker in New Orleans at the site of another major levee breach.

With input from residents in the Gentilly neighborhood of New Orleans, the flood protection advocacy group intends to install a Historic Plaque at ground zero of the London Avenue Canal’s east-side levee breach.

In a prepared statement, New Orleans City Councilwoman Cynthia Hedge Morrell said, “I applaud Levees.org’s program to install Louisiana State Historic Plaques at major breach sites, and I have pledged my office’s full support to Levees.org’s planned installation of a plaque in Gentilly.”

Levees.org will raise the money to pay for the plaque and will also recruit volunteers to install it. The target unveiling date is late March or early April.

“The plaque is our gift to the residents of Gentilly,” says Sandy Rosenthal, founder of Levees.org. “But it’s our intention to craft the text in partnership with representatives of the affected neighborhoods.”

“The plaque is appropriate and conforms to the mission of Levees.org,” said H.J. Bosworth Jr, lead researcher. “The basic historical information about this levee breach will soon be there for everyone to see.”

On August 23, 2010, Levees.org installed its first ever Historic Plaque at ground zero of the 17th Street Canal breach site.

Founded 120 days after Hurricane Katrina, Levees.org’s mission is education about what caused the flooding of Greater New Orleans on August 29, 2005. With over 25,000 supporters nationwide, the group also has satellite locations in California, Oregon, Illinois, Florida, and New York.