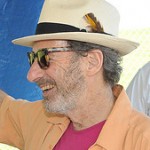 Harry Shearer in a light moment at Levees.org's unveiling of its First Historic Plaque on Aug 23, 2010. Photo/Pat Garin

Actor/comic Harry Shearer will accuse the national media of myth-making at the National Press Club on Monday March 14 in Washington DC.

Mr. Shearer, director of The Big Uneasy and also voice of many characters on The Simpsons, will give a one-hour keynote luncheon address at the prestigious Club.

Mr. Shearer will argue that the nation’s top editors and producers are “notoriously herd-oriented, cling to first-draft versions of news stories, and are reluctant to adjust news narratives when new facts come to light.

Mr. Shearer, long time supporter of and advisor to Levees.org will cite examples including the toppling of Saddam Hussein’s statue in Iraq and aftermath of flooding in New Orleans during Hurricane Katrina.

You can submit a question for Mr. Shearer in advance and during the live event by sending them to @QNPCLunch on Twitter. Or you can email a question to President@Press.org and type TURNER/PICKENS in the subject line. Deadline for emails is 10 am Mar 14.

Click here for more information about the event.
http://www.prnewswire.com/news-releases/comic-harry-shearer-to-accuse-national-media-of-mythmaking-at-national-press-club-117592688.html