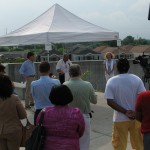 Kevin McGill of the Associated Press has received the Levees.org ‘Seal of Approval’ for accurately stating the facts associated with the flooding of metro New Orleans.

In his April 1, 2011 article, Mr. McGill reports on how nearly 100 blighted properties will be auctioned in New Orleans.

“It’s the latest step in the city’s efforts to diminish a blight problem that was bad before the 2005 storm and worse after the levee breaches and flooding that damaged an estimated 134,000 housing units.”

At our kick-off rally in January of 2006, we stated that we would not stop our work until the true facts about the New Orleans flooding became mainstream knowledge. Associated Press reporter Kevin McGill’s article is clear evidence that we are making progress.