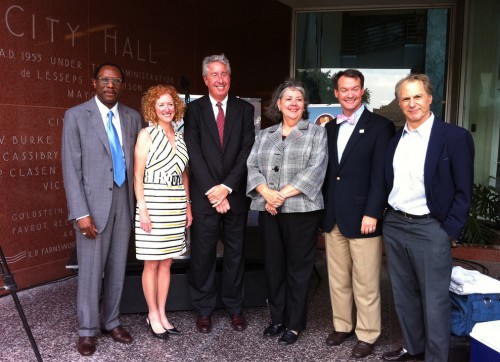 With New Orleans City Hall as a backdrop, Levees.org made some important announcements regarding its nomination of two levee breach sites to the National Register of Historic Places – the 17th Street Canal and the Industrial Canal (east side north).

The Louisiana State Office of Historic Preservation (SHPO) has confirmed that the sites are National Register Eligible Properties and that Levees.org’s 28-page documentation of the two levee breaches (how and why they occurred, their significance, etc) has been placed in a public file that federal agencies must use when undertaking any activities under Section 106 that are in the vicinity of the breach sites.

In addition, the information in this file may be consulted by media, groups and individuals interested in the history of New Orleans’ water and levee systems, and the events surrounding the breaching of the levees during Hurricane Katrina.

To assist the Louisiana SHPO in preparing the final draft for formal inclusion on the Register, Levees.org is posting the Draft Nomination on our website to solicit public comments on the text and digital letters of support which we will forward to the State.

Please follow these Guidelines for Submission of Comments and/or Digital Letters of Support:

2. Deadline for comments is June 10, 2011 since it is our goal for the State of Louisiana to place the Nomination on the August Agenda for the State Review Committee.

3. Deadline for Letters of Support is August 11, 2011. For suggested talking points click here.

4. We apologize, but anonymous input will not be accepted.