One step closer to presenting our case 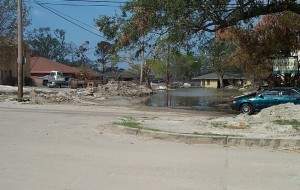 Corner of Warrington and Mirabeau in Gentilly area of New Orleans near ground zero of London Avenue Canal east side breach. Note the floodwater pushed a home (painted yellow) into the middle of the street. Photo/Steve Nelson 10-20-05

The historian for the Louisiana State Office of Historic Preservation has determined our final draft of our nomination of the levee breaches of New Orleans is ready for a second review by the Washington DC historian for assurance the rules and regulations are followed. In August, we present our case before the State Review Committee.

In preparation for the DC review, we are carefully citing all statements with footnotes. During this time, we have decided to share the closing concluding paragraph with our supporters…..

As can be seen from the above narrative, there is no doubt that the New Orleans hydraulic event of 2005 was a catastrophic historic event of unprecedented nature. As previously mentioned, the short term impacts of the catastrophe caused by the levee breaches which are the subject of this nomination included the flooding of over 80% of the city and 100% of nearby St. Bernard Parish, the deaths of over 2,000 people, destruction of approximately $500 billion worth of private property and municipal infrastructure, widespread deforestation due to salt water intrusion, and the temporary and permanent displacement of hundreds of thousands of people who had lost or could no longer live in their homes. Furthermore, the event has seriously impacted and continues to impact national flood control policy and flood safety considerations as described above. For these reasons, the sites of the 17th Street Canal and east side north Inner Harbor Navigation Canal levee breaches clearly qualify for the National Register of Historic Places under Criterion A and Criteria Consideration G.

One response to “One step closer to presenting our case”