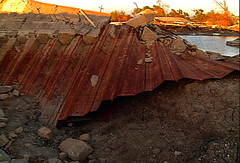 When the New Orleans Corps of Engineers District attempted an 11th hour strategy to block Levees.org from stating its case before the state advisory board, the Governor’s office denied the Corps’ request.

So the next day, the Corps tried another maneuver. Even though Levees.org had paid for title research showing the Corps owned the Industrial Canal breach site, the Corps showed up, again in the 11th hour claiming it didn’t own the site. Therefore, the state had to table Levees.org until November on that technicality.

But guess what? Another records request obtained today shows the Corps does own the site!

We reserve judgment on this comedy especially since there is a silver lining to this unnecessary delay. We now have two more months to build support for Levees.org’s quest to list the New Orleans levee breach sites to the National Register of Historic Places.

We intend to show up at Capitol Park in Baton Rouge with a fat stack of support letters.  Click here to find out how to submit your letter of support.