Despite thumbs down from academic review board, levee breach sites may get historic designation 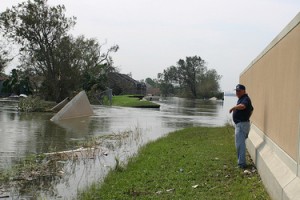 A professional academic board in Louisiana recently voted against placing the sites of two catastrophic levee breaches in New Orleans during Katrina on the National Register of Historic Places.

Two-thirds of the 9-member board voted down the flood protection group Levees.org’s quest to list the breach of the 17th Street Canal and the east side north breach site of the Industrial Canal to the prestigious Register.

The majority of the board members effectively signaled that they didn’t believe the sites of the worst civil engineering disaster in U.S. history were historic and thus deserving of being listed on the NRHP.

Some board members said they were ‘uncomfortable’ with the nomination text because it faulted the Army Corps of Engineers for the levee and floodwall failures.  Several members thought the text contained too much information.

“You have made this very difficult for us,” noted Board Chairwoman Glenna Kramer of Franklin.  “It’s so long and so complicated.”

Despite the Board vote, the State Historic Preservation Officer, Ms. Pam Breaux and her staff continues to support the eligibility of the two breach sites.

On December 29, Ms. Breaux confirmed to Levees.org that she has sent the 39-page nomination – along with her letter of support and other documents pertinent to the breach sites’ eligibility – to the Corps of Engineer’s Federal Preservation Officer in Washington, DC.  This is in accordance with regulations 36 CFR 60 which govern the National Register process.

“We believe the document to be procedurally and professionally correct,” stated Ms. Breaux in her cover letter to the FPO.

We are extremely pleased that Ms. Breaux and her staff believe in this important project which has broad support both in the state and nationally.

According to regulations, the corps’ Federal Preservation Officer, Mr. Terrence Salt has 60 days to respond with the federal agency’s position on the eligibility of the two levee breach sites.

To see who voted and their comments, click here for transcript of Louisiana Review Committee Meeting.

To see who submitted letters of support click here.