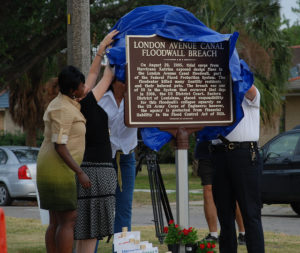 Community leaders in the Gentilly neighborhood of New Orleans unveil a historic plaque near ground zero of the east side breach of the London Avenue Canal. Photo/Hubie Vigreux

In a surprise development, the commanding general of the Army Corps of Engineers, Lt. Gen. Carl Strock, has come clean over statements made to the New York Times after Katrina.

The Corps Commander who was in charge right after the 2005 storm, told NYTimes reporter John Schwartz that although the Corps was responsible for the levee failures, he also fingered New Orleans officials by saying they played a contributing role in the failure of two major outfall drainage canals.

Strock claimed local agencies forced the Corps to build an inferior system for the two canals. This message was repeated for years by other Corps brass including Maj Gen Don Riley and other Corps PR spokespersons.

Now, remarkably, Strock has admitted to a reporter for the New Orleans Times-Picayune that there was no documentation or data to support his statement.

“Throughout our response to Katrina I emphasized how critical it was to be transparent and honest if we were to regain the trust of the public,” he said. “I might have illustrated my description with things I had heard but not personally researched…”

This admission came after Levees.org filed a request earlier this year for documents that would support the Corps’ allegations that they were pressured to build an inferior system. Levees.org reasoned that the duty to provide such documentation should belong to the entity making the claim.

Ken Holder, chief of public affairs for the corps’ New Orleans District office, responded to Levees.org’s records request in a letter released August 22, 2012.  The corps could not produce the documents that Strock and his second-in-command, Major Gen. Don Riley, used to make the claims.

Levees.org has long believed that unsupported defamatory statements made by senior corps officials suggesting that New Orleans agencies played a role in the 2005 flooding may have harmed southeast Louisiana’s recovery by alienating the nation’s citizens and ultimately prejudicing members of Congress. For this reason, Levees.org seeks to re-write the inaccurate template and make certain history is recorded accurately.

Click here for new fact sheet on the failure of New Orleans outfall drainage canals in 2005.