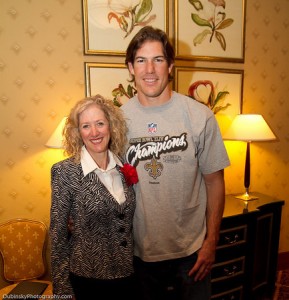 This past Tuesday, NFL Commissioner Roger Goodell admitted that former Saint linebacker Scott Fujita had not contributed to a pay-to-injure program that the Saints allegedly ran from 2009-2011. This announcement nearly fully exonerates Fujita.

(In addition to being a splendid football player, Fujita is also spokesperson and benefactor to Gulf Restoration Network, one of Levees.org’s strongest allies.)

The next day, Fujita replied swiftly and strongly saying, “ I am now purportedly being suspended for failing to confront my former defensive coordinator for his inappropriate use of language. This seems like an extremely desperate attempt to punish me.“

I agree with Fujita’s assessment, and never doubted the integrity of this extraordinary man.

I would have written about this turn of events much sooner, but on Tuesday and Wednesday, as this news unfolded, I was traveling to and from a birthday party for a beloved relative’s 80th birthday party and missed the news.

Note: in the photo, Scott Fujita towers above me, even though I am 5’4” and wearing my tallest heels.

Click here for the full story about Scott Fujita.