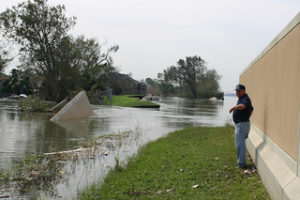 Yesterday, the Bureau of Governmental Research issued a scathing report concluding that SB 79–proposed by Sen Robert Adley–should be rejected.

The BGR report wrote, “the devastating toll taken by the 2005 levee failures…prompted voters statewide to demand a different approach to flood protection in New Orleans.”

Levees.org agrees and believes SB 79 will undo the historic legislation passed after the Army Corps of Engineers’ levees failed the people of the City. SB 79’s permanent changes appear to have one goal: to protect the Oil and Gas Industry.

Last July, the Southeast Louisiana Flood Protection Authority-East filed lawsuit against 97 oil, gas and pipeline companies demanding that they fix the damage they did to our valuable coastal wetlands. But now Senate Bill 79 could derail the suit by allowing the Governor to “pack” the Levee Authority with industry sympathizers.

Click here and send a letter to your state legislators urging them to VOTE AGAINST SB 79.

It is critical that you send your letter by 3 p.m. today Wed April 23rd.

For the full report by the Bureau of Government Research, click here.