The Big Lie and How it All Started; 1st of 4 Excerpts from Words Whispered in Water by founder Sandy Rosenthal 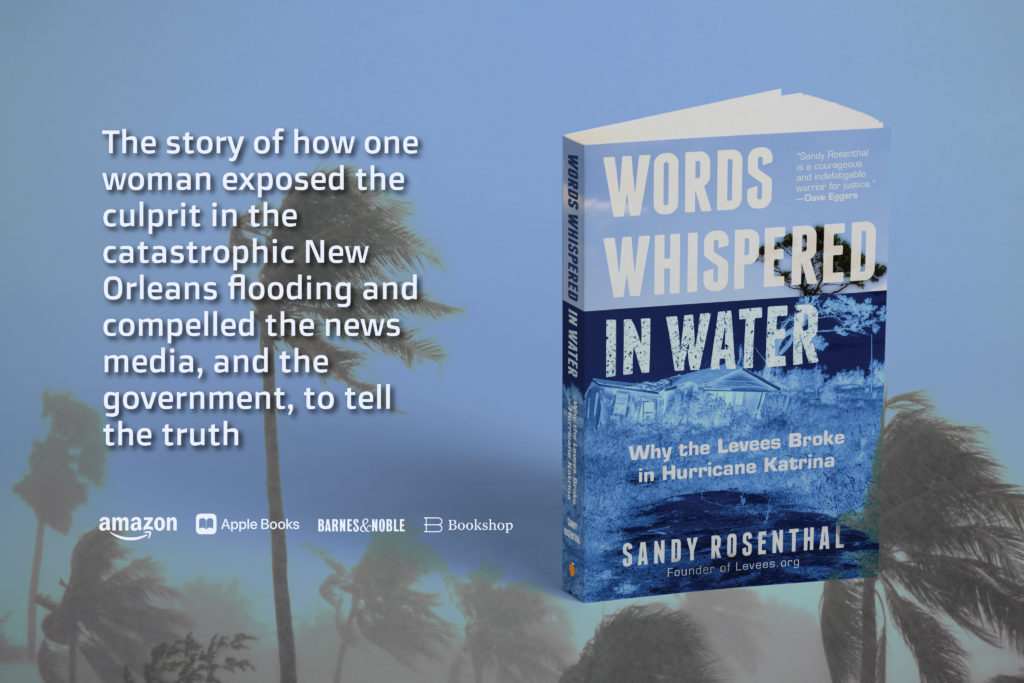 Levees.org founder Sandy Rosenthal has released the first of four excerpts from her debut book, Words Whispered in Water: Why the Levees Broke in Hurricane Katrina (Mango Publishing, August 2020).

The excerpt is called The Big Lie and How it All Started. It comes from Chapter 2; The Flood.

In Washington, DC, (September 28, 2005) the House Appropriations Subcommittee on Energy and Water Development hosted a hearing on the costs associated with the August 2005 flood.[i] Members of Congress, who were responsible for how much aid the people of Greater New Orleans would receive, needed accurate information.

Anu Mittal, Director of Natural Resources and Environment, testified on why the levees were still not complete when storm surge arrived. She read from a script, which she later destroyed, and which bore little resemblance to the General Accounting Office (GAO) report she had submitted that day. Here is the key excerpt:

“… After the (levee) project was authorized in 1965, the Corps started building the barrier plan … parts of the project faced significant opposition from local sponsors and they did not provide the rights of way that the corps needed to build the project on schedule. But most importantly there were serious concerns relating to environmental impacts of the control barriers that were supposed to be constructed … on the tidal passages to the lake. This ultimately resulted in a legal challenge and in 1977, the courts enjoined the corps from constructing the barrier complexes. …” [Emphasis added.][ii]

The effect of the testimony was lethal.

The clear takeaway was that, in the years leading up to the levee breaks, the Army Corps of Engineers struggled to complete the flood protection properly and on schedule but were hamstrung by local officials and environmentalists. In fact, Ms. Mittal’s accompanying GAO report stated none of these things. But the damage was done.

In the videotaped recording, the listeners sitting directly behind Ms. Mittal can be seen registering expressions first of being appalled and then indignation.[iii]

Members of Congress at this hearing were clearly led to believe that the people of New Orleans had brought this levee-breach situation upon themselves. One Congress member in the video stated, “It’s obvious. It’s their fault!”[iv]

Where did Ms. Mittal’s verbal testimony come from? Years later, after painstaking research, I figured out that the material Ms. Mittal presented in her verbal remarks was loosely based on a 22-year-old GAO report.[v] Ms. Mittal had apparently presented cherry-picked data from a 1982 report which even with its neutral “government speak” tone, actually reprimanded the Army Corps officials for their glacial pace in building the levee-protection system for New Orleans in light of the critical need for project completion.[vi]

In a recorded audio 10 years later, Ms. Mittal readily admitted that her verbal testimony in September 2005 was “from three or four decades ago.”[vii] When asked if she still had a copy of her verbal testimony from September 28, 2005, she said no. When asked if she remembered who assisted in the preparation of the verbal testimony and the written GAO report, she said it was not retained. In this day of digital records, there is no excuse for not retaining information on the worst civil engineering disaster in our nation’s history. Someone had clearly coached Ms. Mittal.

The Army Corps has an established policy of creating talking points specifically for influencing people in high places.[viii] The damage from Ms. Mittal’s early verbal testimony cannot be understated, at a time when all eyes were watching, and all ears were listening.

In a phone interview on November 10, 2015, Sen. Mary Landrieu (D-LA) confirmed that videos of postdisaster congressional hearings — like Ms. Mittal’s — were widely circulated and highly influential on members of Congress. When queried on whether Senator Landrieu believed that this testimony may have biased or prejudiced Congress members against the people of New Orleans, the senator responded, “It was well understood that there was pressure from the White House, constantly and early on, to assign blame on the residents of New Orleans for the failure of the levee system.”

So, it began. Four weeks after the flooding that directly and indirectly killed at least 1,577 people and nearly drowned an entire city, our Congress — whether intentionally or not — were given a false perception.[ix] And every resident of New Orleans would soon pay the price because it created an early prejudice in the minds of our Congress members.

The local officials were considered guilty until it was proven that they were not. I searched the internet and could locate no congressional record of Ms. Mittal’s verbal testimony. After searching for six weeks, we learned that no transcript of the hearing was sent to the Government Publishing Office. The hearing was also missing from a list compiled by the American Geosciences Institute.[x] If it were not for C-SPAN — a private company — all information about the early congressional hearing may have been gone forever.

[vii]     Audio recording by the author.

3 responses to “The Big Lie and How it All Started; 1st of 4 Excerpts from Words Whispered in Water by founder Sandy Rosenthal”