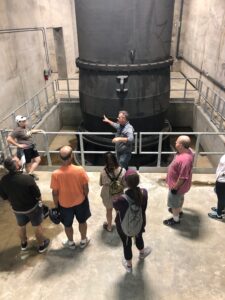 These people are 24 feet below sea level at the London Ave pump station. Photo/Sandy Rosenthal

Six weeks ago, we learned at the board meeting of the Levee Authority East that there’s a problem with the new pump station at the London Avenue Canal.

The problem is one of the larger pumps; the bearing at the bottom was found to be overheating when operating. And there is no back up.

We immediately sent an email to the Chief of Public Affairs for the Army Corps of Engineers (USACE) New Orleans District, Ricky Boyett. We had three questions about the faulty pump. We did not receive a response.

So next we filed a formal request under the Freedom of Information Act and again, asked our three questions about the faulty pump. The corps responded exactly three weeks later; to wait longer would have been against the law. In the response the corps said we were asking questions as opposed to requesting documents. Therefore we needed to contact the Public Affairs office and just ask.

But this is exactly what we had already done and received no response! And now we are back to square one. So, we wrote AGAIN, to the Public Affairs office headed by Chief Ricky Boyett. Meanwhile, there’s a faulty pump at the London Avenue Canal. And no back up pump.

The Corps was responsible for the completion of the London Avenue Canal pump station. Based on the way, we, members of the public have been treated, we feel the corps is stalling. We don’t like this.