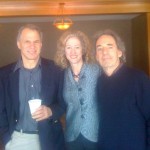 This morning, attorneys for Ivor van Heerden filed suit in the 19th Judicial District Court in Baton Rouge against Louisiana State University for firing him in retaliation for his repeated criticisms of the Army Corps of Engineers.

The announcement came at the Westin Canal Place in New Orleans. There were many speakers and supporters in the room including John Barry, Oliver Houck, Harry Shearer, Marc Levitan, Dr. Mtangulizi Sanyika, and Jed Horne. What they contributed to Ivor’s story ranged from amazing to eye popping to tear jerking.

I hired a video grapher who filmed the entire event, and soon will be releasing their stories, too.

But for now, the important thing is Ivor van Heerden had the courage to represent many others who were intimidated into silence with the threat of losing their jobs or worse. Thank you Ivor van Heerden for doing what is right and at enormous personal expense.