Study commissioned by Levees.org accepted for presentation at LSU conference 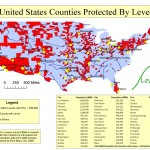 What a difference a FOIA makes.

In April 2009, Levees.org filed a request to FEMA under the Freedom of Information Act (FOIA). We wanted to know where the people lived who were protected by levees.

Six months later, FEMA responded and we learned that the majority (55%) of the American people lives in counties protected by levees.

The results were then published by the New Orleans Times Picayune, Homeland Security, the American Society of Civil Engineers, and the Insurance Journal.

And Levees.org just heard that Boyd’s white paper entitled “Assessing the Benefits of Levees: An Economic Assessment of U.S. Counties with Levees” has been accepted for Challenges of Natural Resource Economics & Policy: The Third National Forum on Socioeconomic Research in Coastal Systems.

One response to “Study commissioned by Levees.org accepted for presentation at LSU conference”