Levees.org got a dress rehearsal 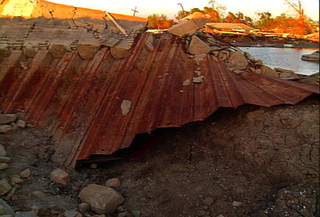 Interconnected sheet piling at the east side north breach site of the Industrial Canal looks like a giant metal grosgrain ribbon. Photo/Francis James

After denying an 11th hour block attempt by the Corps of Engineers, the Louisiana State Advisory Board has tabled Levees.org’s nomination of two New Orleans levee breach sites to the National Register of Historic Places on a technicality.

Over a month ago, the Louisiana State Office of Historic Preservation (SHPO) notified the Corps of Engineers that its property, the Industrial Canal breach site, was being considered for nomination to the Register. This is required.

On the eve of the State Advisory Board meeting, the Corps requested Levees.org’s presentation be moved to November. The Corps said its Federal Preservation Officer needed more time to review the nomination documents. The State called Levees.org and informed them their presentation was being postponed to November. Levees.org resisted and stated its reasons in an email. The State seemed to agree because the State eventually denied the Corps’ request and informed Levees.org in an email that they had “determined that the presentation and Committee discussion/vote can move forward as originally planned.”

On August 18, 2011, Levees.org along with a dozen supporters drove to Baton Rouge prepared to finally state its case before the State Review Committee.

Ken Holder, public affairs officer for the Army Corps of Engineers New Orleans District attended the Meeting and at that time revealed to the Advisory Board that the Corps does not, in fact, own the Industrial Canal property as previously believed.

If this is true – and we don’t yet know whether it is or not – it means the real owner of the Industrial Canal breach site had not been notified. For this reason, the Board tabled our nomination until November 17, 2011.

And we have 60 days to sort the issue out.

On a very happy note, we also have 60 more days to gather support for the nomination. We have lined up an impressive show of support including Senator Mary Landrieu, Governor Bobby Jindal and Mayor Mitch Landrieu.

Levees.org is required to present a power point before the State Review Committee. Karen Anderson-Cordova, PhD, chief of the Environmental Review Section for the Georgia State Office of Historic Preservation has previewed the power point and said she has never seen such a powerful presentation.

3 responses to “Levees.org got a dress rehearsal”